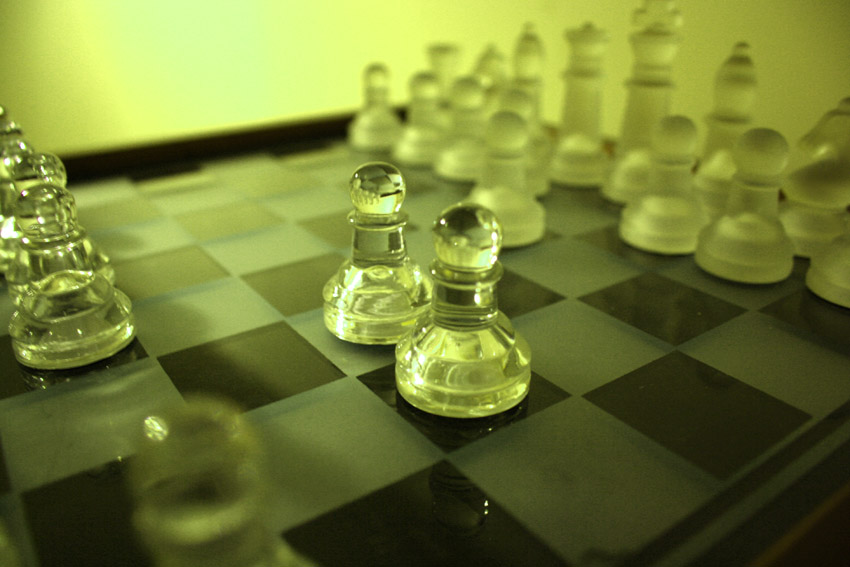 Once upon a time two armies assembled, opposed to one another on a battlefield. The crystal army, led by a foolish king, charged their king’s guard forward without thinking of the consequences. They left their king open to attack…

In “A Course On General Linguistics“(1916) Ferdinand de Saussure made comparisons between chess and language. Saussure was observing some intrinsic relationship between language and games, showing how changes in the design of pieces from ivory to wood make little difference, but changes in the movement or number of pieces distort the “grammar” of a game of chess. In The Medium Is The Massage, theorist Marshall McLuhan put forward a concept that the messages that we receive are not so much in what is said, but in what is used to say it.

There is a saying in school games, “to have pax”. This reminded me of chasing (tag), and something that we used to say as children, “tax” (probably a distortion of “pax”). The origins of the word pax are in Latin – it means peace. We said this in order to take a break, for example when we needed to tie our shoelace. I posed the question to my Facebook community about what was the common term in their school-yards, and received a spate of alternatives from across Ireland, from “boxed”, “tax” and “pox” to, bizarrely, “keys” and, predictably, “f**k off I’m tying my shoe”. There are many variations (my American and Canadian friends suggested “Time-out”) but the rule is the same regardless of where it is played. When you have pax, you are outside the game. This pattern is true in many games, where there are variations in language of games across small regions, but the rules remain generally consistent.

This relates to Jesper Juul’s writing on computer game theory, and how in games there is an interior world (where the game is played), and an exterior world (the real world) that is outside of this. Although a language can be unique to the interior world of a game, there may be times when language moves outside of the interior into the exterior, as a storytelling medium. Like other forms of game, computer games have unique languages that change from game to game. Language is something that is completely and inextricably tied to time (taken to evolve) and space (where it is spoken). Games too are linked to the time (taken to play) and space (that they are played within), yet languages in games can be more universal or easily read than vernacular or other languages.

The new wave of complex gameplay offered by computers has helped to develop new intricacies in game languages. Often teams of players in the online first-person shooting game Counter Strike would use quick-commands to issue orders or suggestions to team-mates using single letter keys (“F” for “Throw a flashbang”, for example). This led to a language of playing that is based more around the symbols, like the “F” letter, and not a meaning that surrounds them. The symbol could just as easily be a raised finger or a drawing of a pineapple outside of the game world, but the cue is universal inside, and players latch onto the meaning after just a few plays.

This is an example of a language that has been developed inside of a game, like the language of “having pax” (or tax, box, etc.). However, in this situation the language spills outside of the game into a broader realm, as found with the communication of many online games. Although the language is trapped in the game world, it becomes universal through internet-based gameplay and is rarely changed from country to country, or area to area.

The heavily narrative-based indie game Braid, released in 2009, has been one of the most compelling examples of a game that both tells a story using the visuals and text, but also uses the game mechanics as a language. This game’s intense and intricate storyline is based on rebuilding broken memories, and piecing together some forlorn element of the hero’s past life.

The goals involve collecting pieces of jigsaw puzzles that give the player a picture of the hero’s past life, which is symbolic of putting a story together. Crucially, the mechanics of the game also offer the ability to manipulate time during gameplay in order to solve puzzles and rebuild memories. This comes to a climax in the final level of the game, where movement in time is crucial to how the wonderfully crafted story wraps up. It is through this time-manipulation language that the story is not only told through visuals and text, but through the way the game itself works.

Artist Sophie Calle created a connection between the language of art, vernacular language and the language of games in her 2009 retrospective Talking To Strangers at the Whitechapel Gallery, London. One of the pieces in this exhibition, Anatoli (1984), described a long train journey on which she shared a cabin with a disgruntled Russian man. Frustrated at Calle for not being able to speak his language, the man eventually began to communicate by playing game after game of chess with her. Although Calle did not know the rules of the game, the impatient gesticulations of her Russian cabin-mate taught her the rules, and for the rest of the journey they shared a communication through this game. The Russian, as a far superior player, won consistently, but not without generating messages and teaching Calle through the medium of chess.

Games certainly have a language, and one that appears to be easier to learn and develop than most languages that the human mind can grasp. At least, that is the fool’s story.

…Their enemies, the glass army, were cunning. They seized their opportunity and killed the foolish king in two swift moves, leaving his army in disarray. To the victor went the battlefield, to the loser only shame. Game over.

4 thoughts on “Fool’s Mate – Language and storytelling in games”